Join us for a pre-convergence field trip to Roosevelt Farm.  Agriculture instructor Ray Cruze will lead a one hour tour for up to 50 people on Friday, May 2nd from 1-2pm. There is no charge for the tour but you must pre-register since space is limited.  Roosevelt Academy was built in the 30’s and they are on the national register of historic places. The student-run farm was started in 1994. Their site is 6 miles away from h.e.a.r.t. off Hwy 27 on the east side of the road, located at 115 E Street. There is a flat grassland in back for parking. Meet at Roosevelt Farm at 1pm or meet at 12:30pm to carpool from the soccer field at h.e.a.r.t. 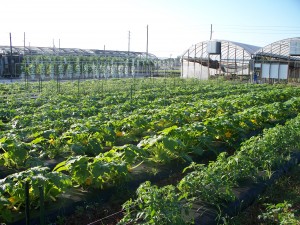 Types of production: Currently there are three forms of crop production technologies used.  One is a vertical growing system and the other uses coir (coconut husk) grow-bags.  The third method of production uses plastic mulch on raised beds with drip irrigation.  All of the irrigation and fertigation is automated to conserve water and nutrients.  While not certified organic, no synthetic pesticides, herbicides or fungicides are used on the crops.  The farm relies on beneficial insects to control pests, while organic fertilizers and soil supplements like fish emulsion, humic acid and kelp help build productive soils.  The soil is cover cropped over the summer with buckwheat to add organic matter and reduce weed growth.

Here are some articles on their project: